Helsinki in a weekend is fun.  There is outdoor drinking and an the opportunity to sauna.  The city is walk-able and the food scene is impressive.

To get to know Helsinki and do the highlights, we’d suggest two full days of walking the city.  To be sure, tram options exist for touring but they lack the meandering nature that these suggested walks give you.

There are 3 really special churches that are worth seeing in Helsinki and a walking tour that hits each of them also features some other sights that are worthwhile stops.

Begin just to the east of the Esplanade up the hill at the Uspenski Cathedral.

It’s a striking exterior of red brick and green and gold onion domes.  There are 13 domes representing Jesus Christ and the 12 apostles.  The Cathedral was built between 1862 and 1868 and you really feel how close you are to Russia when you enter the Cathedral.  Inside, the Cathedral hosts a variety of icons and other Orthodox decorations.  We thought the chandeliers hanging from the ceiling were remarkable.

Steps down from Uspenski and toward the Esplanade takes you past the Market Square on your left and the yellow-hued Presidential Palace on the right.  The market is worthwhile to walk through and offers a good selection of fish dishes to try and woolen scarves to buy if the wind off the Bay of Finland has you hunkered down.  Hang a right up Sofiegatan for a grand view of the Lutheran Cathedral.

Get closer. Walk through Senate Square and up the steep steps festooned with young Finns soaking up the sun.  The church was designed by a German, Carl Ludvig Engel, to replace a smaller church on the same site.  The church was erected as a tribute to Grand Duke Nicholas I, the Tsar of Russia, and became a Lutheran denomination after Finland’s independence in 1917.

The church and the surrounding square are neoclassical.  In the center of the square is a statue of Russian Czar Alexander II.  If you have Russian overlords, this is the one you want.  In 1863, he gave Finland more autonomy and never pushed for “Russia-fying” the Fins.  When we were there, Senate Square was the place to meet for kicking off a protest – we think it was animal rights.

Lining the roof of the church are statues of the apostles.

The interior is spartan at best. 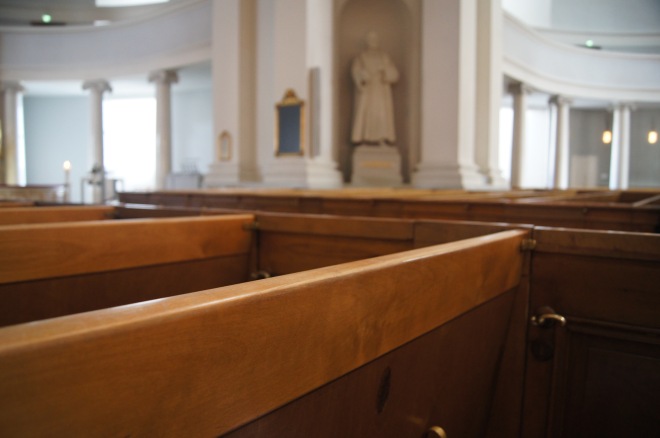 From there, head back to the Esplanade, where there might be a Merimekko fashion show taking place with free ice cream!

Walking hand in hand along the Esplanade is an enjoyable detour from the craziness back home.  From the tulips to the lush green grass and the throngs of people shopping and drinking coffee, it’s really an enjoyable hub of action but not too much action.

Continue along the Esplande westward and pass by Stockmann’s Department store.  You’ll make a right toward the statue of The Three Blacksmiths.

When we were in town, this shops-lined rhombus had an outdoor wine garden and was absolutely packed with people in the afternoon.  Think about it for later.

From here you can walk along the busy Mannerheimintie with streetcars, buses, cars, bicycles, and pedestrians. Soon, you’ll pass on your right the Museum of Contemporary Art and the glass-covered Helsinki Music Center.  Cross the street toward the Finland National Museum, which appears to be a very large castle.  The museum comes highly recommended.

From the museum, its a couple of S-turns up residential streets to the Temppeliaukion Church – or Church in the Rock.  The only reason you’d know it was there is that there is a large rock formation in the center of a large residential area.  Finding the entrance is more difficult than it looks and you’ll walk all the way around the square 180 degrees from where you entered.  Go inside.  It’s really quite a sight. 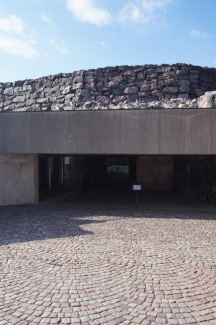 Church in the Rock

Exit the square down Fredrikinkatu.  Halfway down you can take a left toward the Forum, a large mall surrounded by enticing outdoor cafes, or better yet, continue to Uudenmaankatu where you’ll hang a left and walk three blocks into Bier Bier.  The place has a wonderful beer list and a staff that will help you find something local.  Leather chairs, mahogany walls.  You feel like a Finnish parliamentarian.  It’s what you deserve after the day of hiking.  Two doors down is a highly recommended pizza joint called Skiffer.  Also recommended for dinner a short walk away is family-owned Maxill.

Admittedly, this walk is way, way longer.  There’s no shame in doing it the smart way by hopping on the Line #2 or #3 street car the first time you can.  Those two lines run in a clockwise circle around outer Helsinki.  We had a nice weather day so we walked it.

Head toward the other north-south main drag on the western part of town called Mechelininkatu.  It’s a residential area with not much to see but it leads directly to the Sibelius Monument. 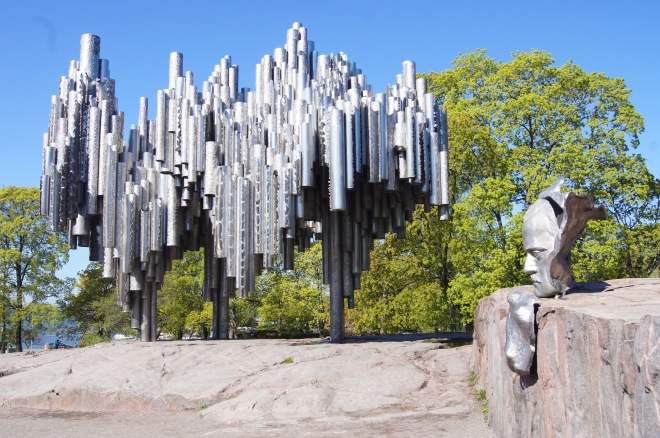 The monument is a collection of 600 stainless steel pipes built to commemorate Jean Sibelius, a great Finnish composer.  It is set in a grove of trees just up from the water.  Here you can go down to the pathway along the water continuing away from the street to arrive at the bridge to Seurasaari Open-Air Museum.

As you can see, even on Memorial Day weekend, Finland presents a cold chill when you get on or near the water.

Continue across the bridge to experience the museum.  The museum is built on an island and is a collection of 100 historic buildings from all around Finland.  A picnic snack is welcome and worthwhile to do if the weather is nice.  We did the “free” option by just walking around and window shopping instead of going inside the dozen or so buildings that are part of the tour. 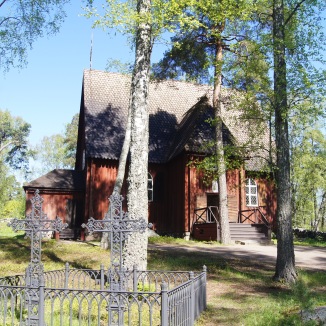 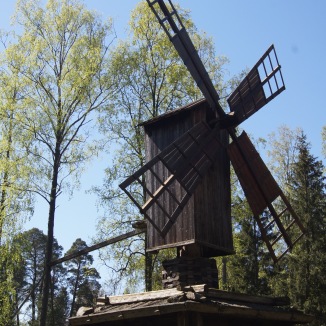 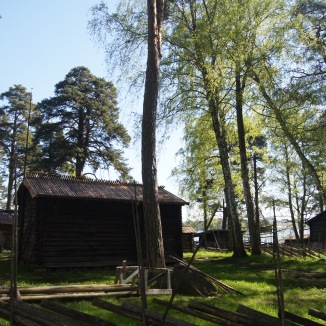 From the park, you can make the 20 minute walk through mostly residential neighborhoods to the Olympic stadium.

Helsinki hosted the 1952 summer Olympic games.  It was supposed to have held the 1940 games, but World War II got in the way. Helsinki was the northernmost city to ever host the summer Olympics.  Fun fact: the Soviet Union, China, and Israel all made their Olympic debuts in Helsinki.  Head back down Mannerheimintie past Finlandia Hall, designed by Alvar Aalto, and cross in front of the green-domed train station and walk along Kaivokatu. 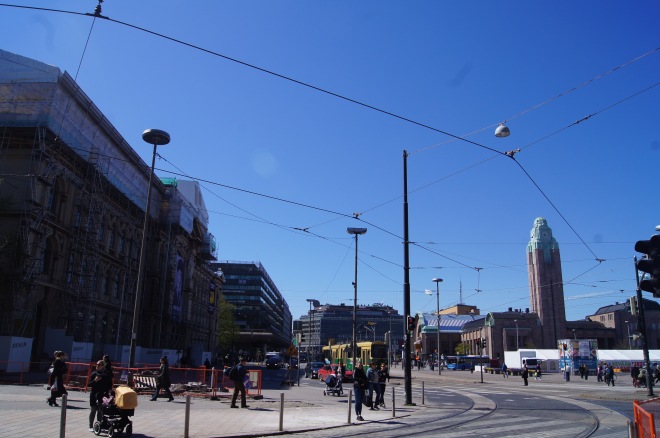 The street is very busy with lots to see.  The Ateneum is across the street from the train station and houses Finnish works from the 1700s onwards.  Diagonally northeast from the Ateneum is Kaisaniermenkatu which takes you to the entrance for the Botanic Gardens. 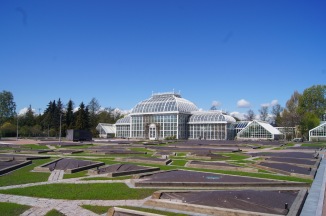 That’s it – Finnish History in a nutshell.  Some additional tips and tricks follow.

Arrival:  Arrival from the airport is easy.  When we were there, the best way to get into the center of town was to take a 20 minute Finnair city-bus ride to the central station.  It’s 6,30 Euro per person.  Now, Helsinki has a Ring Rail Line that is stunningly gorgeous.  It’s cheaper than the bus but longer because it takes an indirect route.

Stay:  Highly recommend the Glo Hotel Art.  The hotel is just a few short blocks away from the Esplanade and the trendy shops Fredrikinkatu.  It’s got modern amenities in an old castle-like building.  Breakfast is a serviceable and highly recommended before doing the walking tour around town.

Shopping: The action is near and on the Esplanade.  It’s a tree lined park with traffic encircling it counter-clockwise.  Shops there include well-known Finnish fashion company Marimekko and Iittala, which sells Finnish glassware including that designed by architect and designer Alvar Aalto.  Nearby is Keskuskatu, which includes many designer shops like Sand Copenhagen and the Stockmann Department store.  On a sunny day, the shops are crowded but at a cafe outdoors appears to be the place to sip Rose and be seen.

Connections: Helsinki in a weekend can be combined with Tallinn.  The Finns flock to the 2 hour ferry ride to party the weekend in Tallinn, which is much cheaper than Helsinki for a night of drinking and karaoke.