The Napa River lazily snakes its way between parallel mountain ranges.  Over a thousand years, it formed the valley floor.  When you wake up in Napa Valley, those mountains are shrouded in a dense fog.  A chill is in the air.  While it is a hot summer in the rest of the United States, a Napa morning feels reminiscently like fall.

You may not see the tops of Mount Veeder or Atlas Peak or Spring Mountain as your drive highway 29, but rest assured, there are grape vines aplenty already basking in the warmth of the summer sun.  Then by 10:30 or 11 am on the valley floor, the sun has ushered the fog back to San Pablo Bay.  Grape vines dot the hillsides; burying their roots deep in tectonic, volcanic soil.  By late summer, the leaves on the grape vines are a robust green and grape clusters of all varietals abound. 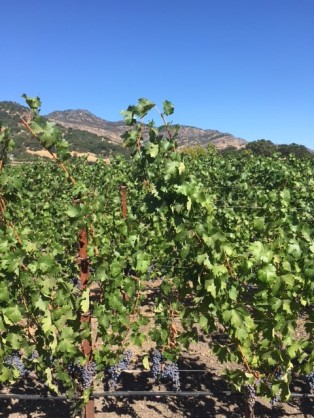 Two main roads parallel one another.  California State Route 29 cuts through the valley floor while the Silverado Trail hugs against the mountains to the east.  Along each road, wineries pop up.  Some familiar names – Duckhorn, Mondavi, Berringer; some less familiar – Blackbird, Goosecross, Charles Krug.  Each winery designed with its distinct style, just like the wine poured inside the tasting room.  While you’ll spend time learning that the main towns along 29 from south to north are Napa, Yountville, Rutherford, St. Helena, and Calistoga, the more important learning comes from understanding the 16 American Viticultural Areas of Napa Valley.

The Napa Valley today, with the plethora of tasting rooms, gourmet restaurants, and stunning art, may never have come to fruition without the Paris Wine Tasting of 1976.  Made famous by the film Bottle Shock and the book The Judgment of Paris, California wines made their indelible mark on the world by beating soundly their French counterparts in a David-vs-Goliath battle of white wines and red wines.  Steven Spurrier, a British wine snob who only sold French wines, set up a wine tasting competition to showcase leading French wines.  Stacking the deck against the Americans, Spurrier had French judges conduct two blind tasting comparisons.  The first put French Chardonnay against Napa Valley Chardonnay.  The second put French Bordeaux against California Cabernet Sauvignon.  To dramatic effect (in the film and book), a Californian wine won each category: Chateau Montelena for Chardonnay and Stag’s Leap Wine Cellars for red wines. 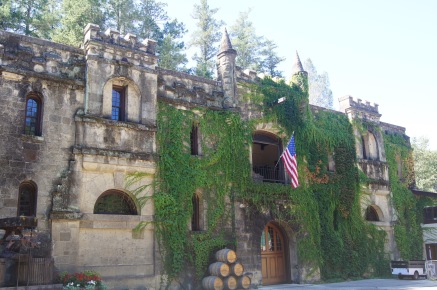 A weekend in Napa Valley is one of the most amazing experiences we’ve had.  It’s one of the few places we’ve returned to and done some of the same things we did previously.  But don’t take our word for it, ask anyone in any business in Napa Valley and if they are not born in the Valley, they had a head-clearing holiday and moved there to sell wine, art, or food.  It’s tempting; we were tempted.

Early morning flight from the east coast.  Optional detour to Muir Woods or the Golden Gate Bridge from SFO is possible.  If you do either, grab a lunch from the sandwich counter at Good Earth Natural Foods in Mill Valley.  The day’s special could be meatball Parmesan or go “on-menu” for beef brisket with bbq sauce and cole slaw on a freshly baked multi-grain roll.

Arrive at Frog’s Leap Winery for a 2:30pm Garden/Cellar Tasting (reservations recommended), which takes you on a stroll around the Frog’s Leap grounds sipping on four or five (or seven) current releases (depending on the tour guide).  You’ll learn all about Frog’s Leap’s  biodiversity, their history, and their commitment to dry farming.  The vines there stretch and extend to 30 feet below ground seeking out water because of dry farming where irrigation is not used.  It’s a wonderful experience to learn about the terroir of the Valley and the relative merits of farming differently than your competitors.

Inside the tasting room 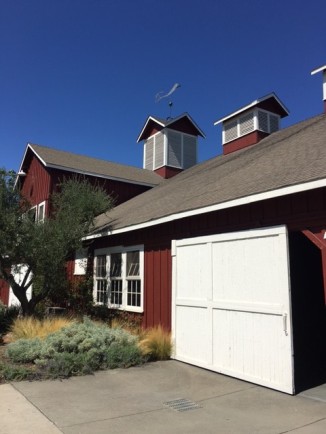 When the tour and tasting is finished, why not join “The Fellowship?”  The Fellowship of the Frog – that is – Frog’s Leap’s wine club.  It’s probably the best options wine club we’ve seen where you can purchase library wines at a discount.  Very cool.

Evening should be spent in Napa.  In the summer, there are concerts (called Napa City Nights) along the Napa River in the Veterans Memorial Park.  Different Fridays bring different styles of music; but the town is out and about and there will be many Napa Valley wines being opened in the park.

Some highlights of a visit to Downtown Napa include heading over to Oxbow Public Market for some shopping and oysters at the Hog Island Oyster Co. (do a dozen raw and a serving grilled “farm style”), tastings at Vintner’s Collective (wineries that do not have their own tasting rooms), and dinner at Carpe Diem (flatbreads or duck mac n’ cheese) or Morimoto Napa (share the omakase menu for one and supplement a la carte). 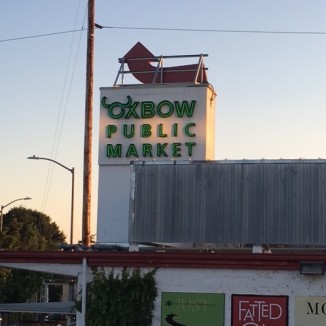 Saturday morning sounds like spa time.  We highly recommend heading up to Calistoga and visiting the amazing Spa Solage.  Treatments there include massages, facials, mud scrubs, relaxation baths and entry to the spa with the geothermal pool. 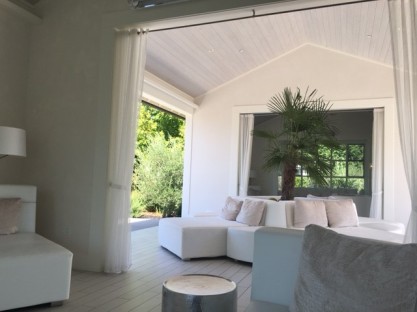 Nearby are several wineries including Chateau Montelena and Sterling Vineyards.  Montalena presents the history of the 1976 Judgment of Paris very well and is open for tastings without appointment.  Sterling presents a corporate-feeling yet comprehensive tour by appointment, but begins with a cable car ride that presents great views over the Valley below that is worth admission just to see once.

We further delayed our “pickling by wine” by heading to lunch at Brasswood Bar + Kitchen on Router 29 in St. Helena.  The restaurant is part of a larger grouping of buildings including a tasting room for the vineyard (formerly Cairdean), art gallery, and shops.  One of the most amazing things we ate during our weekend was homemade, freshly-pulled mozzarella that was stretched and served over thick toasted bread drizzled with olive oil and topped with crushed black pepper.  Pair that with padron peppers (1 out of a 100 is spicy) and roasted tomatoes glazed in olive oil and balsamic and you have a winning appetizer on a gorgeous patio. 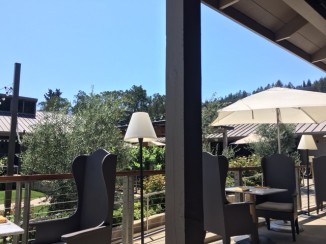 After lunch, head to a tasting appointment at Goosecross Cellars or Duckhorn Vineyards. Both are very different.  At Goosecross, we were the only ones tasting amidst the large stainless steel tanks, and the gentleman pouring was the manager and sometimes-picker.  At Duckhorn, we made reservations in advance and were among several dozens dotting the porch and patio.  Both experiences have comparative advantages. The former is small, independent, with immediate access to the winemakers. The latter is run like a well-oiled machine. Both, however were generous of wine and spirit. 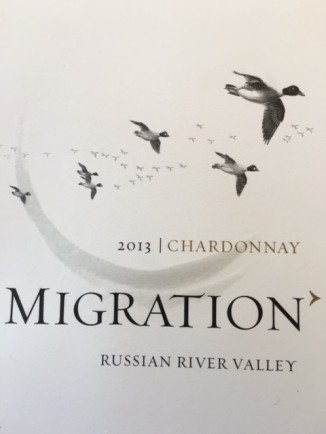 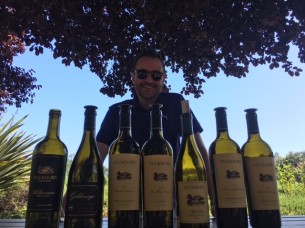 Dinner should be spent in Yountville where we highly recommend Redd Wood with its remarkable ‘Cacio E Pape’ pasta and its crispy wood-fired pizzas.  The great thing about many restaurants in Napa is the ubiquity of local wine.

If your hotel doesn’t provide breakfast, start with brunch at Ad Hoc + Addendum, Thomas Kellar’s accessible a la carte answer to his 3-star French Laundry or Bouchon, his bakery.  From there, check out the shops and art galleries in the Yountville Marketplace where you can pick up some delicious and decadent chocolates at Kollar Chocolate. 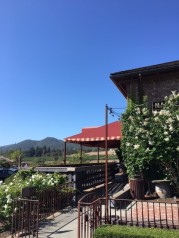 Instead of getting in the car and following Highway 29 or the Silverado Trail, why not spend the day in the tasting rooms of Yountville?  Some great options include Jessup Cellars (with its art gallery), Hope and Grace (with its friendly staff), and Maisonry, which curates the tasting for you to small batch producers based upon your palate .  For the last of these, we recommend booking early and starting here first.  If you get hungry or need a distraction from the wine, have a bite to eat at R+D Kitchen or entertain yourself at the art available at Maisonry or Arena Galleries for some wonderful local art in Yountville or ride down to Napa and enjoy a fresh California take on sushi at Eiko.

From there, you can head back south toward SFO, return the rental car, and hop the red-eye back east.  Or… you can stay for more wine!

Stay: For a “spa-like-light” experience, head to The Senza Hotel.  The Senza comes with access to a pool, gorgeous views, a spacious modern room, and gym.  For a more “bed and breakfast-y” feel, check out one of the Four Sisters Inns.  The Lavender Inn some rooms feature a hot tub outside and all have funky wallpaper indoors.  We’ve had exceptional experiences at both and would go back to either.  Both come with tastings of local Napa Valley wines from 5 to 7pm.

Why we’ll go back: The wine, the people, the experience.  It really is like nothing else.

#Christmas in #Karlsruhe, the fan city, celebrated on a cold, cloudy Sunday afternoon. #travel
The Capital of #Christmas! #Strasbourg #France was the last stop of our tour of Christmas markets in Germany and France and it did not disappoint with lights, glitter, and decorative scenes on every building.
More #Christmas from Germany. Romantic town of Rothenburg ob der Tauber. #travel #chriskindlemarket
It’s beginning to look a lot like #Christmas. #travel #longweekend #nürnberg
Calling this one “the musket ball” 2 oz. @knobcreek bourbon; 1/4 oz. Leopold Bros. 3 pins herbal liquor; 1/4 oz. Amaro; 1 tsp. Luxardo cherries syrup. Add ice and stir. In cocktail glass, insert large ice cube, light a match, and extinguish trapping the smoke in the glass under a plate. Strain and serve.
Located the rare of the rare. #Napa #beergeek #Pliny #olderbrother