Seeking Out Giants in Northern Ireland

On a weekend trip to Belfast, we used one of our days to jaunt outside of the city toward the coast, sites of filming the Game of Thrones series, and the home of Irish whisky. The trip is a full day but only an hour outside of Belfast.

The Dark Hedges is located in rural Ballymoney, County Antrim, northwest of Belfast. On the way there, it doesn’t immediately feel like you are destined for Westeros (Game of Thrones), but this quiet road filled with twisty, turny beech trees does feel otherworldly. Make this the first stop to avoid the tourists who arrive in droves.

Similarly, Ballintoy Harbor, north of Ballymoney provides a view of the Iron Islands and a quaint fishing village to explore.

Close by is the Carrick-a-Rede rope bridge, where, if you close your eyes, you can imagine living in the fisherman’s cottage, on the tiny island, at the edge of the world. This 350 year old rope bridge connects the wee island with the mainland, and is suspended almost 100 feet above sea level. For some people, the rickety swinging rope bridge is rather terrifying, as the water swirls below crashing on the jagged rocks.

The crown jewel of being further afield from Belfast is the Giant’s Causeway. Behind the large visitor center lies a wealth of fun and fascinating walks. The admission gives you access to an audio guide that provides the stories behind the myths. The Giant’s Causeway is a series of basalt columns or biscuits. The science behind the columns is boring, the legend entertaining.

Rather than basalt columns made hexagonal by melting and cooling, according to legend, the columns and biscuits are the remains of a causeway built by a giant. As the story is told, Irish giant Finn MacCool was challenged to a fight by the Scottish giant Benandonner. Finn accepted the challenge and built the causeway across the North Channel to Scotland so the giants could meet. After Finn sees Benandonner’s size, he retreats and hides. Finn’s wife then disguises him as a baby and when Benandonner sees the size of the baby, he reckons that Finn must be a giant among giants and flees to Scotland, destroying the causeway behind him. Across the sea in Scotland, the same basalt columns exist at Staffa.

The Giant’s Causeway UNESCO World Heritage site is large and permits an all day hike if you want it. 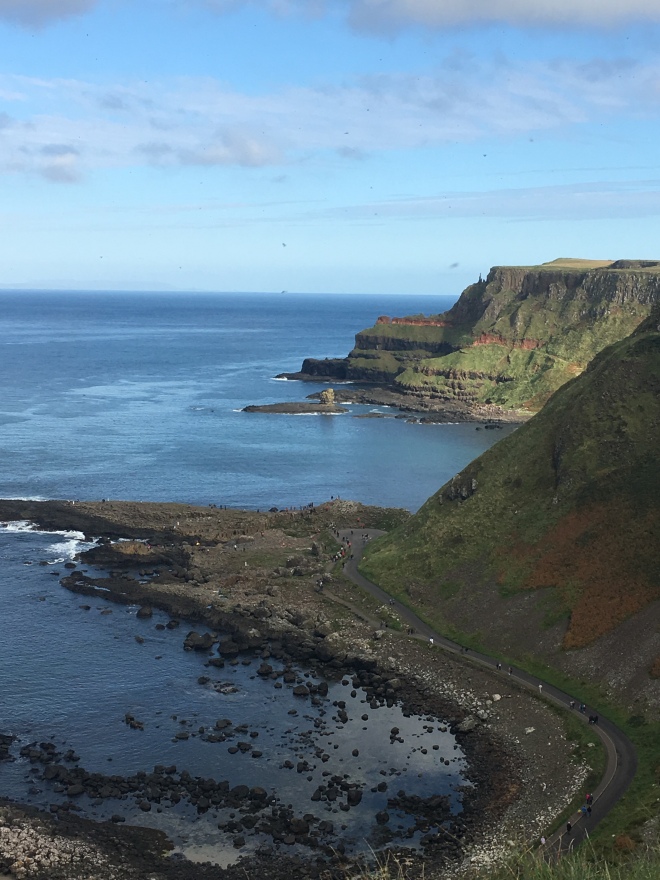 A good hike needs to be finished with a reward so we drove 15 minutes to the wee town of Bushmills for a visit to the famous distillery of the same name. The distillery tour is awesome considering the amount of hands-on touring you experience from tasting mash to smelling barley. The additional advantage of the tour is that it ends with a tasting of Bushmill’s range of whiskies. Pay attention to the website for announcements concerning “Silent Season,” when the 400 year old distillery undergoes periodic maintenance and no tours are offered. In the town of Bushmills, there are a few restaurants worth seeking out, but we hit up The Hip Chip, a chip shop and fish shack for beautifully crispy golden delicious cod and haddock cooked to order.

From Bushmills, it was a lovely 2-hour drive along the coast as the sun began too get lower in the sky back to Belfast for dusk and dinner.

We did this day-trip in November when the days are shorter so more time can be spent in summer at each of these stops. This was an easy trip and one that we would certainly do again.

#Christmas in #Karlsruhe, the fan city, celebrated on a cold, cloudy Sunday afternoon. #travel
The Capital of #Christmas! #Strasbourg #France was the last stop of our tour of Christmas markets in Germany and France and it did not disappoint with lights, glitter, and decorative scenes on every building.
More #Christmas from Germany. Romantic town of Rothenburg ob der Tauber. #travel #chriskindlemarket
It’s beginning to look a lot like #Christmas. #travel #longweekend #nürnberg
Calling this one “the musket ball” 2 oz. @knobcreek bourbon; 1/4 oz. Leopold Bros. 3 pins herbal liquor; 1/4 oz. Amaro; 1 tsp. Luxardo cherries syrup. Add ice and stir. In cocktail glass, insert large ice cube, light a match, and extinguish trapping the smoke in the glass under a plate. Strain and serve.
Located the rare of the rare. #Napa #beergeek #Pliny #olderbrother