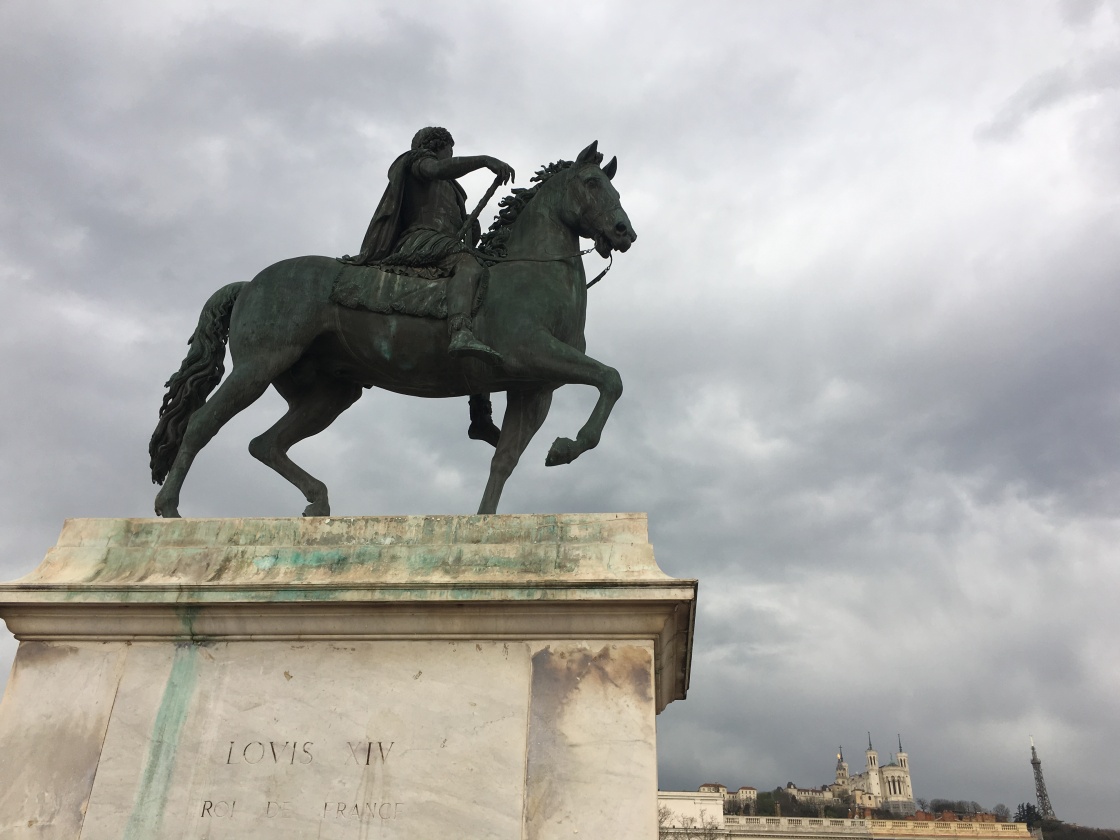 On a humid, overcast day, the 2 hour train from Geneva arrives at serviceable and not-very-grand La Part Dieu train station.  To be sure, there were signs for a taxi stand but I promptly ignored them instead opting for the 1.5 km walk to La Presqu’île, the peninsula between the Rhone and Saone rivers that marks the heart of Lyon.  On any other day, without a roller bag suitcase and the construction workers making the sidewalks on Lyon’s Cours Lafayette wider and smoother, this would have been an enjoyable walk.  It wasn’t.  On another trip, taking a cab.

Lyon itself is a UNESCO World Heritage site.  In its designation, UNESCO cited the “exceptional testimony to the continuity of urban settlement over more than two millennia on a site of great commercial and strategic significance.”  If UNESCO is giving out world heritage designations for longevity, I think to myself that there might be some things in the back of my refrigerator that should be considered.  Gross.  But I digress.

The reason I came to Lyon, besides to get out of Geneva for a day, was because of the city’s long designation as a gastronomic powerhouse.  While Paris has just taken over the rights to number 1 in the world in Michelin-starred restaurants, this only happened recently and Lyon still ranks second.

When I arrived around noon, my room at the Hotel Silky by HappyCulture was not ready yet so I ventured out for a traditional Lyonnaise lunch.  Highly recommended is Café Comptoir Chez Sylvie just next door.  But I wanted something with a different history and, well, just because, a Michelin star (or two).  I ventured north beyond the church of Saint Nizier to Leon de Lyon. 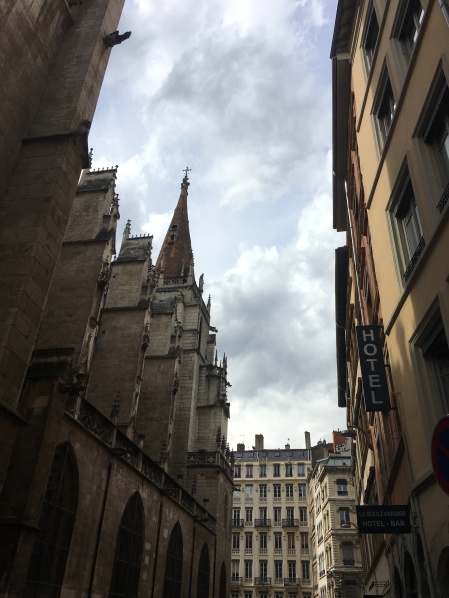 Found at the end of an alleyway dotted by delivery trucks at lunchtime on a weekday, the brasserie is the last on the right hand side. 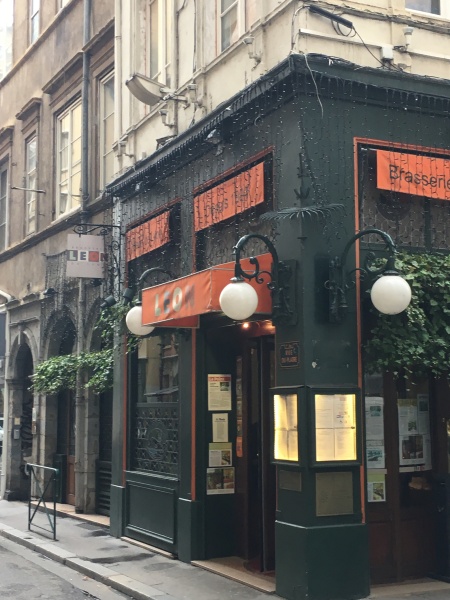 Walking inside is like walking back in time.  The bright textile colors featuring the Leon de Lyon logo are balanced out by dark wood trim and black and white photos of the famous that have dined before you line the hallway walking back to the dining room.  Whether it be myth, legend, or something nearer to truth, Leon de Lyon is known worldwide for “surrendering” the two Michelin stars granted it previously.  The story is that Chef Jean-Paul Lacombe (who’s office and between-service nap-time quarters are upstairs of the dining room) wanted to prevent his restaurant from having to raise prices to continue to be associated with the Michelin ratings.  Believe what you will but the inescapable truth is that the dining room hosted the 1996 G7 Summit with President Jacques Chirac hosting President Bill Clinton, among others. 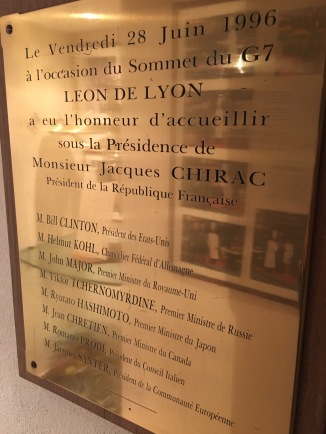 I’m provided the option of the daily menu, which for 24.50 Euro gives me the choice of an entree and main course.  The sounds of the brasserie transport me to another time and place.  There’s silver clanking against the porcelain dishes in the dining room.  Wooden spoons scrape and bang and stir in copper pots in the kitchen.

My first course is a terrine of beef; I catch myself thinking: “how simple.”  But then what is amazing about this dish is the lack of fat.  It’s fresh.  Frankly, it’s light.  It pulls apart from its mold so perfectly that the sweet jelly on top covers every stretched piece of beef.  When I think about how easy this would be to make, I’m reminded of leftovers of steak or pulled brisket or tri-tip and that glaze of fat on the meat that is just always there.  It’s not in Leon de Lyon’s terrine of beef, anyway.

Before my main comes, I switch from a rose to a red wine.  The “bouchon” style is intended that the patron and the proprietor are close.  I feel that way from my waiter who tells me what he drinks when he eats these two dishes.  Not what he would drink; what he drinks.  I notice this distinction when I take the first bite of my duckling cooked pink with cranberry sauce and pair it with my red Rhone valley wine.  And then when I savor the mushrooms studded with thyme and rosemary, Chef Lacombe greets each table before bounding up the stairs to his office.  It’s a Thursday afternoon in March; hard to believe.

It’s night-time in Lyon.  The humidity earlier in the day caused heavy thunderstorms.  The warmly lit Basilique Notre Dame de Fourviere and Cathedrale Saint-Jean Baptiste glow amid the downpours and sounds of saints bowling above me.  I walk south toward Place Bellecour and my evening dinner reservation at Paul Bocuse’s Le Sud.  If I didn’t have my heart set on one of the Bocuse restaurants, the brasserie and bouchon along the Rue des Marronniers are tempting enough to stop in,

Le Sud is Bocuse’s seafood place and the decor tells that story.  First, there is an “outside” space covered by large windows opened onto a gorgeous open courtyard.  Second, we notice that the space is decorated by white-washed wood paneling, oars, flotation devices, and anchors signaling that we are in for a seafood dinner.  Third, the bright colors of Le Sud place-settings scream south of France… Mediterranean.

The wine list, service, and food continue the tale.  I ask for the freshest thing in-house and I’m told about a fish caught earlier in the day.  It’s filleted perfectly and served with sun-dried tomatoes, roasted zucchini, and sauteed garlic.  The waiter brings me a half carafe of a Sancerre the chef recommends for the fish.  And, again, the wine pairing suggestion feels like you are in someone’s home.

It’s the end of my night in Lyon.  The city has entranced me.  Maybe it’s the Sancerre I had at Le Sud.  Or it could be the night cap at Eat & Drink’s.  Or the way the city hall reflects in the wet pavement.

But really its how I was treated eating just two meals in Lyon.  The bouchon style where the proprietor makes you feel like part of his family in his home made all of these meals so much more special.  We connected: over food, over wine, over the experience of eating in Lyon.  While simple, it was everything I could have wanted.