Belfast.  It’s one of those cities.  Just mention its name and you evoke grainy images of urban warfare; of bombings; of the IRA and the UVF; of the struggle between monarchy and democracy.  And it is not just confined to memory; indeed, evidence of “The Troubles” – the colloquialism of the Northern Ireland Conflict lasting from the 1960s until the Good Friday Peace Agreement in 1998 – is everywhere in Belfast.

And the city is still divided – literally.

There is a “Peace Wall.”  Made of concrete, corrugated steel, and standard fence reaching heights up to 35 or 40 feet in places.  Belfast still separates its Protestants and Catholics.  Despite the 1998 peace – or in spite of it – the wall still closes at 6pm on weekends to stop Facebook taunting from spilling over into the streets.  Homes on the Catholic side on Bombay street were so close to the wall that steel cages were built onto the back of the houses to protect occupants from missiles thrown from the Protestant side.  Adding steel on top of concrete and fencing on top of steel just could not do the job: the wall was never tall enough.

Peace line at Bombay Street seen from the Catholic side. 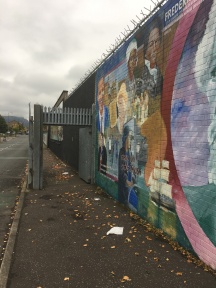 Gates in the peace line.

Peace line along Cupar Way seen from the Protestant side.

The Troubles had everything to do with what it meant to be from Northern Ireland.  Were you Irish or British?  Did you prefer divided or unified?  Loyalist or not?  The divide between unionists and republicans broke down along religious lines with Protestants wanting to remain with Great Britain and Catholics wanting a united Ireland.  Not surprisingly, the difference in opinion had everything to do with power and representation in government.

The Protestant Murals off Crumlin Road

The Catholic Memorials on Bombay Street

Mural of the burning of Bombay Street in 1969 by loyalists.

But Belfast is so much more than that era.  Belfast is a cosmopolitan city with a small town feel; there’s a vibrant new restaurant scene featuring new takes on local Northern Irish fare; traditional pubs sit next to trendy clubs; the old shipyards build renewable energy windfarms instead of steamer ships; where Titanic was conceived and welded, HBO’s Game of Thrones is created today.

Because of all of this, we learned all about what gives Belfast “the craic,” (slang for “happening”) — the people.  Some tips for an amazing 36 hours.

The Crown Liquor Saloon or Crown Bar is a wonderful example of a Victorian gin palace and is one of the best-known pubs in Northern Ireland.  Owned by The National Trust, it still has so many of its original Victorian features.  The exterior is decorated in polychromatic tiles.  This includes a mosaic of a Crown on the floor of the entrance.  The interior is also decorated with complex mosaics of tiles.  The red granite topped bar looks like you just entered a church.  And the entire pub is lit by gas lamps. 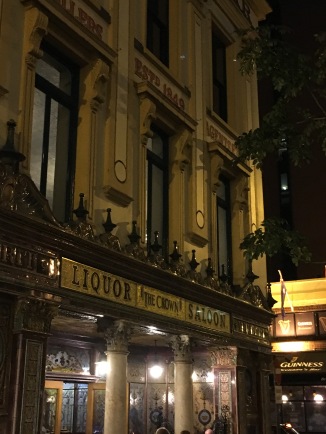 Exterior of the Crown Bar

Snug at the Crown Bar

Emily in a snug

The Crown has ten booths, or snugs. Built to accommodate the pub’s more reserved customers during the Victorian period, the snugs feature the original gun metal plates for striking matches and an antique bell system for alerting staff.  Extra privacy was then afforded by the pub’s etched and stained glass windows which feature painted shells, fairies, pineapples, fleurs-de-lis and clowns.  What made our trip to the Crown Bar so spectaculatr was Andy, our bartender.  He let us try various gins, secured us a snug, and showed us how painstakingly lighting the gas lamps is every night.  It was an unbelievably special welcome to Belfast.

While The Crown Bar is distinctly Protestant, join the other side of the coin at  Kelly’s Cellars — one of Belfast’s oldest traditional Irish pubs.  Locals say it has the best pint of Guinness in all of Belfast.  Situated in the heart of the city, Kelly’s Cellars feels like you are stepping back in time.  There are whitewashed walls, exposed wood beams, an uneven concrete floor, and several rooms off of the main bar. 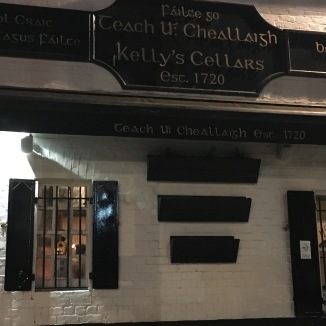 Each time we ventured in, a small band was playing traditional Irish music and the patrons were singing along.

Crumlin Road Gaol looms tall as a reminder of its more famous former inhabitants Eamon de Valera, Bobby Sands, and Michael Stone.  The black cab parks near the political murals of the Falls and the Shankill.  You hear the tale of the cabbie, who has his own take on “The Troubles.”

St. George’s Market was built between 1890 and 1896 and is a phenomenal market hall featuring delicious local food and fantastic local products.  We stopped in for brekkie and a snack on Saturday morning and were overwhelmed with the choices.  We began our culinary journey having a scrumptious sausage and fried egg sandwich.  Then we jumped head first into the oyster cart for some briny little delicacies farm-raised just off the north coast of Northern Ireland.  Best part of St. George’s are the vendors, who will have a full conversation with you if you want.

Built in Belfast, it was perhaps the most famous ship that ever sailed, sinking on her maiden voyage. The Titanic Museum tells the story of the Harland and Wolfe shipyard, the people who worked there, and the birth of the Titanic. 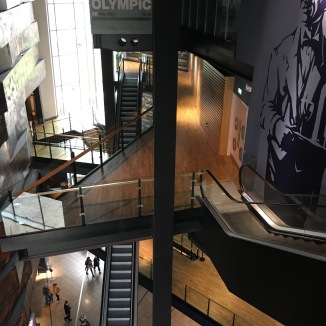 The museum is one of our favorite museums that we have ever been to.

Pro tip:  buy tickets ahead of time online and skip the line.  Tickets can be picked up at the kiosks in the lobby.  If you forget to buy your tickets, smartphone usage in the lobby is faster than waiting in the ticket queue.

The floor plan takes you through the history of Belfast ship building, the importance of Harland & Wolfe and Star Lines to Belfast as a growing city, then to the Titanic, and what went into getting it ready to sail.  The museum features a “ride” through the slips where the massive ships were built and then through the majesty that was being aboard the Titanic.  You end with the stories of those lost in its sinking and in the bowels of the museum watching films on discovery.  Outside, the space is sparse but the massive weight of history cannot be shaken. 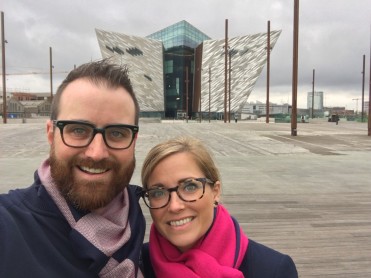 That is, until you see your favorite characters from Game of Thrones walking into Titanic Studios nearby.

One of the features of City Council Hall which visitors enjoy is the collection of stained glass windows that are located throughout the building.  The windows which illuminate the Grand Staircase, East Staircase, Principal Rooms and Chamber are all original to the building from 1906.  Since opening stained glass windows have been unveiled in City Hall to mark historic events or celebrate the contribution to the city by various individuals, organisations or groups. 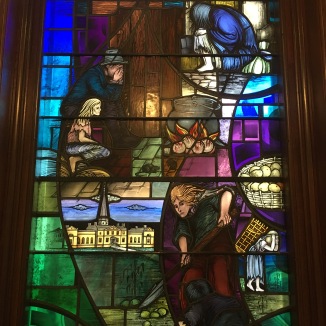 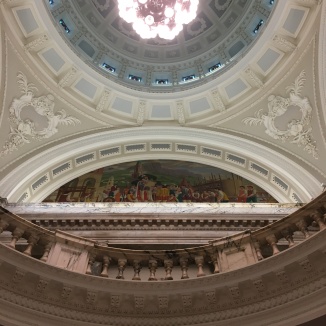 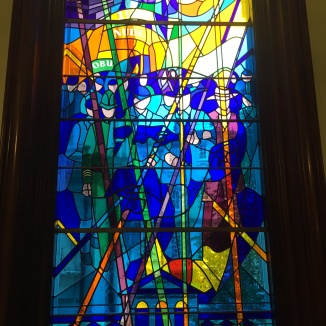 OX is a Michelin star restaurant in Belfast featuring local, seasonal ingredients. The style is easy mid-century and the open kitchen is bustling. The reasonably-priced set menu was our route, but there is no way to do this wrong.

Why we’ll go back… the people, the food, the culture, the resurgence. Belfast is a city poised to re-establish itself as a power in the United Kingdom.