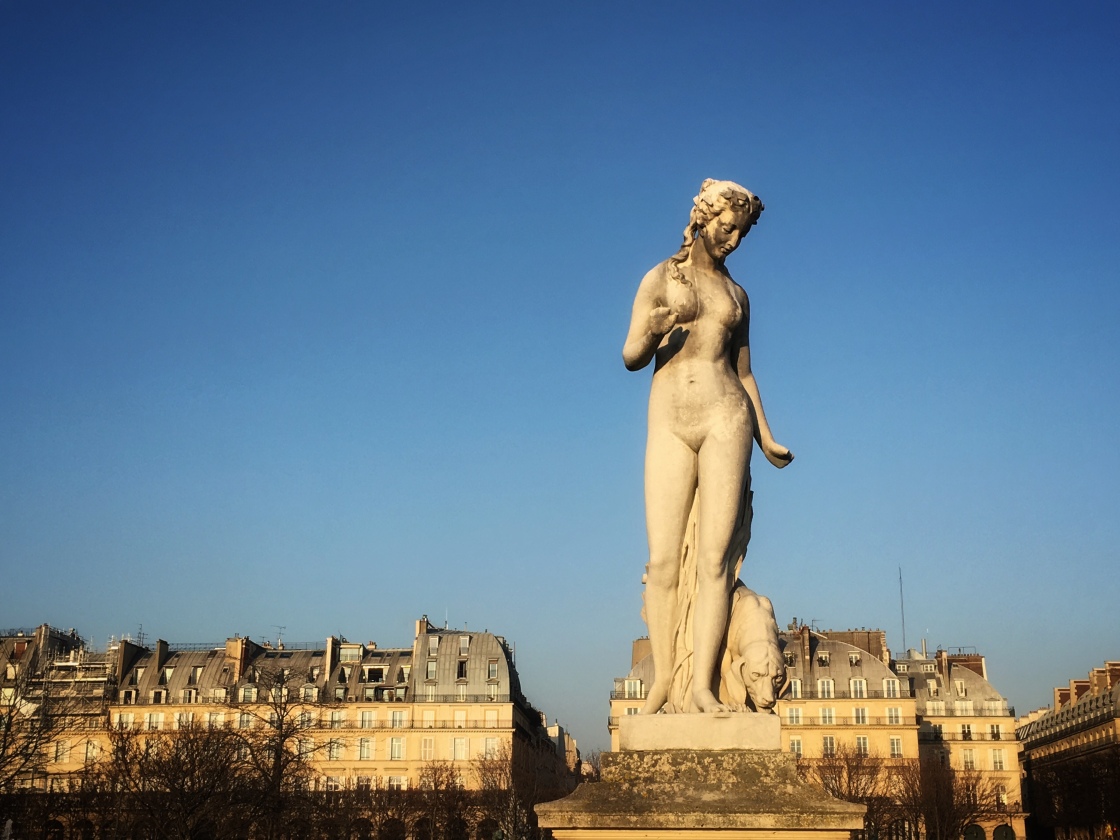 We fled Washington, DC for Trump’s inauguration because we just could not be here for that. So when darkness comes to your doorstep, you flee 6,000 miles to the city of lights. And indeed it is. Listening to Rick Steves’ podcast recently, I was reminded that the city of Paris has an entire office within the city government dedicated exclusively to lighting the city’s bridges and architectural gems. This was the first time we had returned to Paris since our honeymoon and we were able to just live a Parisian lifestyle for the weekend and not feel rushed to do all of the high level must-see sights. We stayed in a flat, ate locally, and took in new museums we just didn’t have the time for previously. For fun, this post is divided by the Seine – into the Right and Left Bank!

Walking the streets of Paris on the Right Bank just before dusk and into evening provides one of the great joys in life that just forces any latent jet lag to leave our system.

On our first afternoon, we walked from our home base in Le Marais to the Louvre through the Jardin des Tuileries across the Place de la Concorde (where Robespierre and Marie Antoinette were guillotined) and up the Champs Élysées to the Arc de Triomphe (commemorated the same year Napoleon’s body returned to Paris). By the time we got there and after some opportune shopping, the sun had set and we were weaving our way down a few side streets near stylish boutiques and light-filled designer studios until we got our first view of the Tour Eiffel sparkling against a dark January sky. It’s so easy to forget about everything else going on when you glimpse those sparkling lights against the dusky sky. We stopped, took photos, and truly felt the arms of Paris wrap around us to say bienvenue, you are safe here.

We spent the first 24 hours of our Paris trip on the Right Bank. Our AirBnB was located in the Place des Vosges, a 17th century square lined with row houses. The flat was a third floor walkup with a view of an inner courtyard. Sparkling clean and with enough amenities to feel like we were real life Parisians.

Of course, the Right Bank is the location of most of the city’s best known sites – where our first-night stroll took place. On a Friday night, our dinner destination was Poulette nicely situated a walking distance from Le Marais. Poulette was a dream – a local crowd, a stunning zinc bar, stark black-and-white tiled floor, and Belle Époque scenes in ceramic tiles. All they really do are great wines and great steak frites. Steak and frites. And wine. No wonder it was a joy to dine there.

In the morning, we grabbed a local coffee and croissant before going to the Musée National Picasso-Paris. We took our coffee to go, arrived early to avoid the lines, and stood outside a few minutes before 10am for opening. The museum is within a large city mansion and has several floors. The museum showcases some of Picasso’s most-loved works and is reminiscent of the Picasso museum in Barcelona.

A wonderful way to break up our day is a round of shopping in Le Marais. These shops are so enjoyable with the proprietors often the ones in the front of the shop to greet you. Here we found our favorite parfumerie: Parle Moi. Father and son, master noses, mix perfumes and found the right scent just for us. We still get compliments on these scents and purchase from them years later.

On the Ile de la Cité, there are two great tributes to world architecture: the Cathédrale de Norte-Dame de Paris and Sainte-Chapelle. At the former you can’t help but be looking out for the gargoyles that dot the roofline to come to life. At the latter, its a wonderful surprise as you enter a government building to find a stunning chapel with light pouring in through the towering original 13th century stained glass.

The New York Times writes about the left bank in its 36 hours piece as a step bank in time to a black-and-white Robert Doisneau photo and I could not have described it any better. The cacophony of students at the Sorbonne, the meandering cobble-stone streets of the Latin Quarter, the well-manicured Luxembourg Gardens, and the massive Les Invalides, home to Napoleon’s tomb. The left bank surely has its own style and culture and our next 24 hours in Paris intended to get to know it better.

The Cluny Museum is within the Latin Quarter, which may be one of the most massively underrated museums in the world. Situated in a turreted Gothic mansion, the Cluny is home to Paris’ collection of medieval art. This art represents the time when centuries ago people started to come out of the Dark Ages. The art is a wonderful collection topped off with a room of tapestries of the Lady and the Unicorn.

A short walk from here is lunch at La Jacobine. Situated within an arcade of shops and cafes, La Jacobine is consistently ranked as offering the best escargot in Paris. On a cold and rainy January day, escargot and French onion soup with fresh-baked baguette were just what we needed to continue along our tour.

Saint-Germain-des-Pres is a fun neighborhood for shopping and strolling. At its center is Église Saint-Sulpice, an ornate 17th century Roman Catholic Church. The church has a long history of famous organists and a gnomon, which is essentially a sun dial that tells the equinox from the sun passing through a window to the top of an obelisk and onto a brass line that cuts across the cathedral’s floor. No wonder this church is prominently featured by Dan Brown…

Dinner on a Saturday night took us to the narrow passageways of Saint-Germain-Des-Pres to Semilla. Semilla is a modern take on classic French techniques, serving only a daily menu of locally sourced ingredients. The decor is modern to match the clean presentation. And it is hopping here on a Saturday night, making it feel all the more like a golden find.

Back to the Right Bank

On a Sunday morning, we walked to the Marché Bastille, which is a long open air farmer’s market right where the Bastille used to sit.

We got up early and took the metro north of the city to the Saint Ouen flea market. This is a sprawling area with fine antiques and Chinese junk. It is overwhelming at first, but there are deals to be had including on copper pots and vintage crystal.

Our next stop via Metro was the Musée Marmottan Monet, which is further afield than most of Paris’ museums that are more centrally located. But as this museum houses an immense collection of Monets in a large city mansion, it is a must see on any Paris itinerary. Of note is the large oval room in the bottom of the house, which was inspired by the hall designed for Monet’s Water Lilies murals in the Musée de l’Orangerie. The large, open room allows visitors to see a progression of Monet’s work, as well as to view his canvases both up close and from afar. This is a perfect place for contemplation and reflection. Just a 25 minute walk through the 16th arrondissement is the Trocadero, which provides an unobstructed view of the Tour Eiffel as Parisians watch the sun set along the Seine.

That night we returned back to the right bank for dinner in Le Marais at a cozy restaurant/bar called JaJa. The mood was dreary and cold outside but very warm and welcoming inside.

Why We’ll Be Back

It’s Paris and we love it here.

This post was re-published 4 years after this trip to celebrate Joe Biden’s inauguration as the 46th President of the United States.