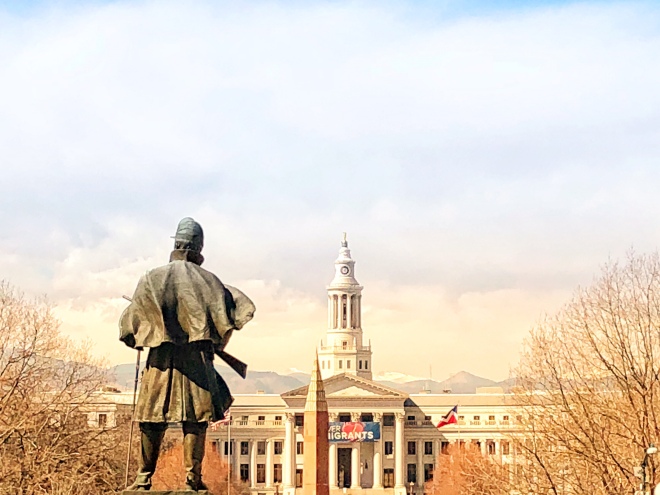 Delicious food. Craft beers. Mile high air. Most people think of Denver as a jumping off point into the playground of the Rocky Mountains and one mile high and all that.

But with what’s happening in downtown Denver these days, Denver itself is a weekend destination.

Denver has a ton to offer for restaurants that feature local ingredients and inventive menus. Before we get into it, it’s important to note that Denver neighborhoods are branding themselves using four-letter acronyms that correspond with their geography. We’ll use the acronym below and parenthetical the full name of the neighborhood. 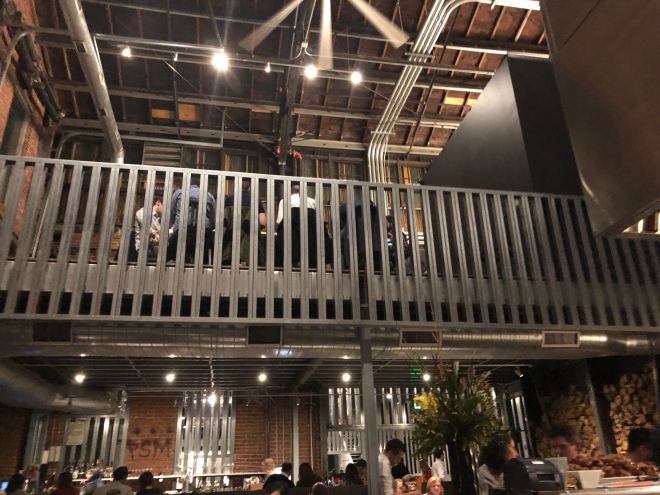 Located in the RiNo district (River North), this is an area of town that is quickly gentrifying with new apartment buildings and gyms. One type of gentrification in Denver is the creation of a collective of restaurants, bars, stores within one large cavernous warehouse. Acorn is set in one of these reclaimed warehouses now named “The Source” (picture taken post-1am).

The vibe is so decidedly hip. On a Friday night, twenty-something young professionals are teeming out of the taco place across the warehouse from Acorn and couples are in conversation over cocktails at the large bar in the middle of the building. We’re early for our 8:30pm reservation so we take spin and stop in the corner at a local micro brewery pouring inventive beers. Looking around at the cavernous space, the gates of stainless steel bar separating the shops from one another, and above to the second and third floor offices, you can almost feel the old brick walls standing straighter than they had in a while. This is reclaiming history.

Acorn is getting all kinds of accolades in the Denver food scene and the crowded restaurant bespeaks a team that has not lost a step. The signature piece in the open air kitchen is the wood fired grill and oven. Stacks of fire log sized cut aspen line the walls opposite the well-apportioned bar.

The serving sizes are shareables. We ordered several dishes to try. Our favorites included the beer tartare – sunchoke chips to scoop up tartare with a mustard made from the egg yolk – the pork belly – crispy skin, juicy inside, served over green farro – and the shrimp and grits – deliciously coated bay shrimp with a holy trinity sauce over creamy grits. 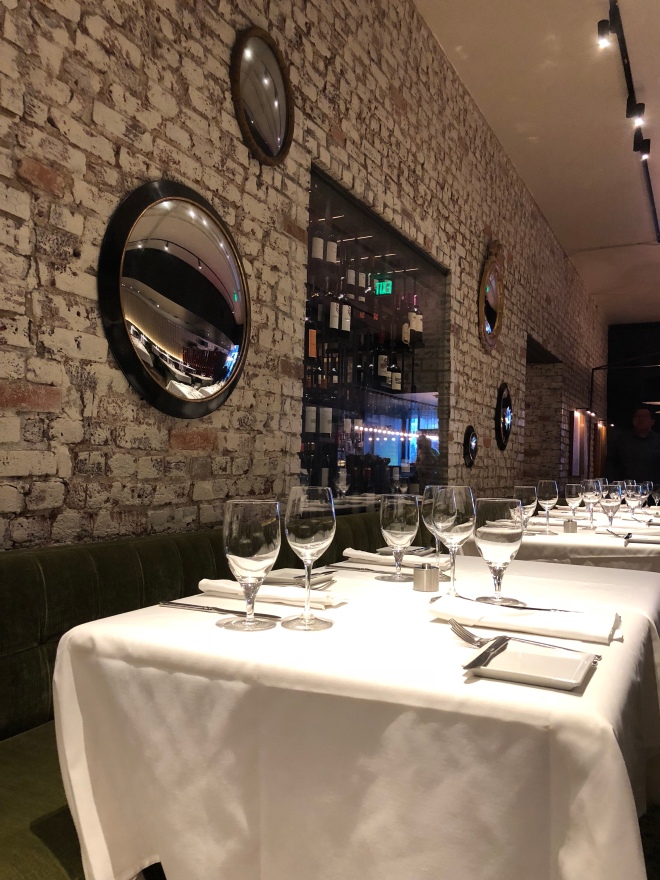 Sometimes its a white table cloth brunch; other times its diner food. Somehow, Rioja in Larimer Square combines refined cuisine with the homey-ness of the neighborhood griddle. We were there on St. Patrick’s Day – which as an aside, Denver features the largest St. Patrick’s parade of any city west of the Mississippi – but to show how not stuffy Rioja is, the featured brunch cocktails were green.

We started with an order of the cronuts, served with a blackberry and lemon cream. Delish. 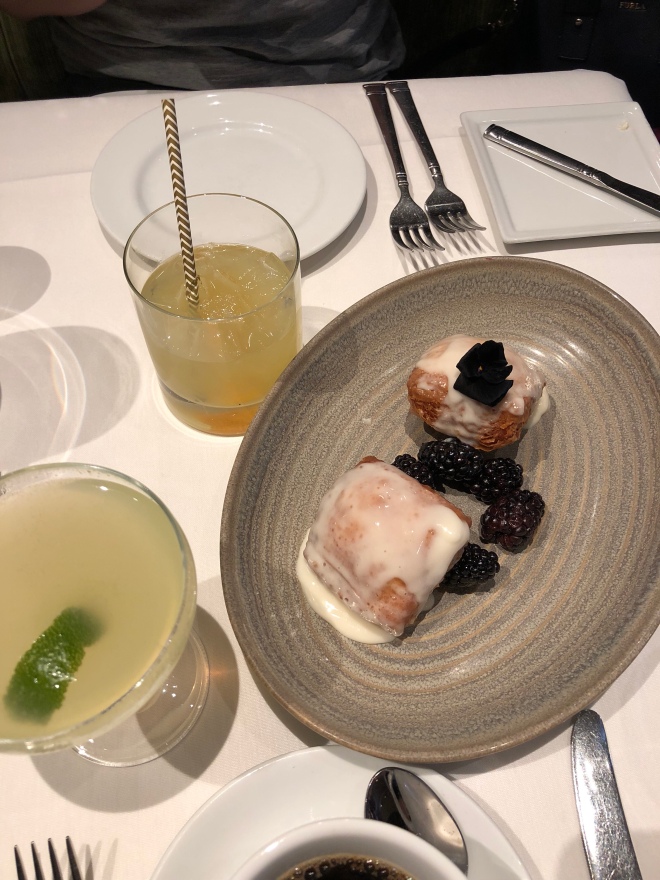 From there, we had the breakfast sandwich and the “hangover cure,” which was nothing short of amazing – slab bacon, avocado crema, tater tots, Crimini mushrooms, sliced avocado, all atop a scrambled egg. Diner refined.

Located in LoHi (Lower Highlands), the restaurant is at the top floor of an office building. We’re here for the views of downtown Denver across the Platte River combined with great Mediterranean food. 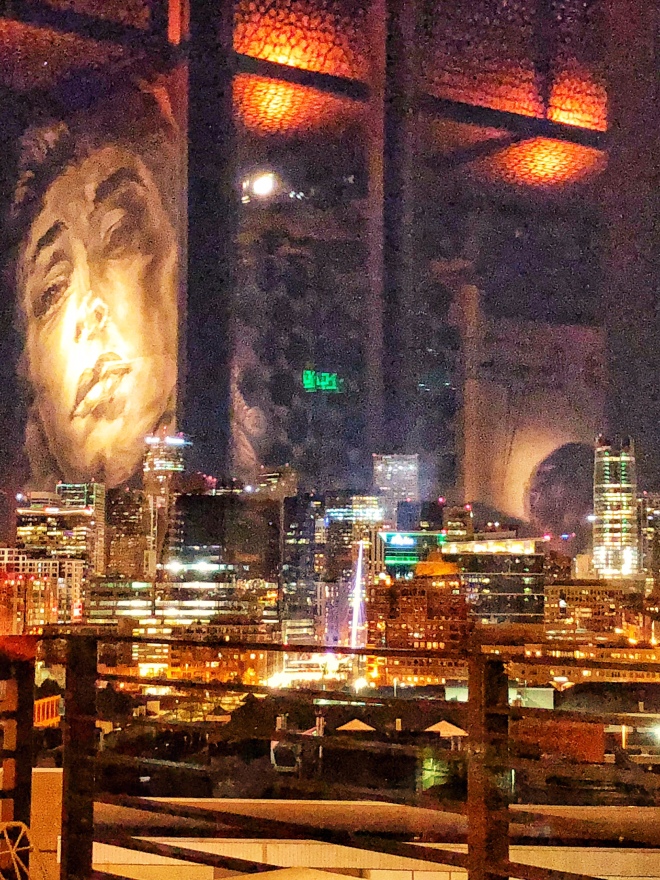 On a Saturday night, the restaurant is packed, but we’re seated with friends in the part of the restaurant with the best views of downtown Denver and out towards the Broncos stadium. From service to drinks to the food, the experience at El Five is nothing short of perfect.

Highlights include the Turkish Pizza, which is pheasant confit, apricots, raisins, greens, chocolate jus all on a puff pastry pizza (not pictured) and the Ash Roasted Carrots, which don’t have as much ash-y flavor as we thought when ordering but were still one of the best things we had (pictured).

The Crispy Cauliflower Yufka and Hanger Steak were also quite good (pictured).

The small sausage paella was loaded with salumi, loom, merguez, and chorizo that we could barely get to the rice (which, is not a bad thing, but very filling) (pictured). For a Saturday night in Denver, this is the place to go.

Located in Capitol Hill, which we think is named because its a slight incline up from the capitol building (ps all of downtown Denver is flat), Beast and Bottle is a gem. We came for brunch, and so did everyone else. It’s a small place so we sat at the bar in the center of it all. One of our favorite aspects of brunch was the “whiskey in the morning” cocktail, which is a combination of cold-brewed coffee, whiskey, and delicious pine liquor. From there, we ordered the brekkie sandwich, featuring some awesome sausage straight from the farm, and a lamb-potato hash, with home-cured pastrami. This was the best way to start the day.

We are Top Chef, on Bravo! TV, people so we absolutely had to hit the Chef Carrie Baird restaurant while we were in Denver. Carrie was a fan favorite of the Denver Top Chef season because of her awesome personality and the fact that she couldn’t stop winning challenges by making “Fancy Toast.” Fancy Toast is perfectly toasted bread topped with deliciousness (or so it seemed on TV). It turns out, though, that Chef Carrie has a fancy toast on her menu for all to try irl (in real life). The fancy toast on the menu is referred to as the best part of French onion soup — the top!

‘Thick slices of perfectly toasted bread coated with melted onions and topped with smother gruyere cheese. Awesome. From there, we moved onto a pasta course and chose a duo, served family style. We chose the short rib pappardelle (right) and the crab orecchiette (left) and both were to die for.

The best part of the evening occurred just as snow started falling and just before we grabbed an Uber back to the airport. We had a chance to speak with Chef Carrie before she left for the night and she was delightful, so thrilled that we came out to Denver, in part, because of her role on Top Chef. It turns out that food really does bring people together.

Union Station in Denver used to be a hole. There were literally only two trains per day. One arriving from Chicago and one leaving for Chicago. It was a neglected part of town. So how did it become an awesome spot with a bunch of restaurants, a hip hotel, and a fancy bar? It all came from Dana Crawford, who began her revitalization of downtown Denver with Larimer Square in the 1960s. When banks wouldn’t lend to a woman, she found a bank that did. Since 1960, she has been involved in almost every renovation project in downtown Denver, from the original designation of the LoDo District and the creation of Larimer Square to Union Station. The Terminal Bar takes up the entire open space of Union Station — long bar tables, chesterfields, shuffleboard. It’s a cool place to be at happy hour or for last call. 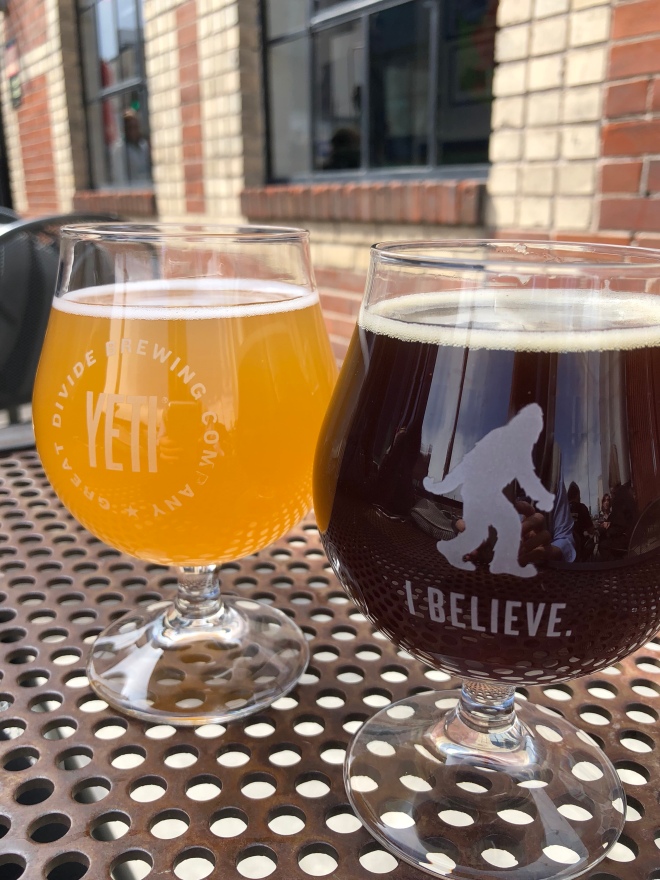 Great Divide is the pioneer of the craft beer scene in Denver. The Brewery and Tap Room is located a few blocks south of Coors Field. With a nice patio and a spacious bar room, it’s definitely a place to try some really inventive beers.

Jagged Mountain is a bit more raw than Great Divide, located just a few blocks away. These beers are inventive, unique, and downright weird. The bar room is a huge space with plenty of board games to keep you entertained.

Prost is an authentic German beer garden. Bavarian flags line the walls and the ceiling. There are long wooden tables and benches. And the beer is truly Bavarian – 100% of all ingredients from Germany. Located in Lo-Hi, this is a perfect spot to spend a Sunday afternoon.

The Crawford Hotel located right in Union Station is the perfect spot. From the cool train-kitsch rooms to the discounts at the restos in Union Station to the complimentary Tesla transportation, the hotel is a phenomenal deal. Especially when you consider that the Denver airport train terminus is Union Station, making this a perfect option for a stay.